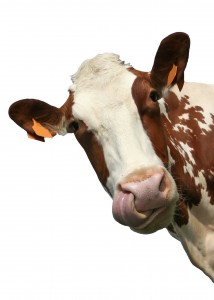 Grass-Fed Beef is Better for You & the Environment

Slope Farms is one of very few providers of sustainably raised, grass-fed beef in New York State, but there’s reason to believe that such farms could dramatically grow in number.

“There are 3 million acres of unused pasture land in New York State. That’s enough land to raise all the beef consumed in New York City,” said Ken Jaffe, the proprietor of Slope Farms in East Meredith, New York. He made his remarks as a panelist at “Meat and Potatoes: A local solution to a National Problem,” an event produced by the American Institute of Wine & Food on a recent night in Manhattan.

To make that happen will require a good deal of change. Current U.S. Department of Agriculture regulations are more favorable to the corn-fed beef raised on CAFOs (concentrated animal feeding operations) that pose the dangers of E. coli contamination and Mad Cow Disease, the commonly used name for Bovine Spongiform Encephalopathy. Cows raised on CAFOs are administered antibiotics to counter the ill effects of their unnatural corn diet. They are fed corn made cheap and plentiful by heavy subsidies of taxpayer dollars. Cows in CAFOs are also given growth hormones to add to the weight of each animal, though panelist George Faison of DeBragga.com said the use of hormones diminishes the quality of the meat.

Family farmers like Ken Jaffe produce beef that are free of the diseases brought on by the unnatural corn diet and closely confined conditions, but still face a system of legal requirements developed in the face of the threat to human health posed by cattle raised in CAFOs. One such rule makes it difficult for a farmer like Jaffe to have his animals humanely slaughtered, a hurdle that needs to be overcome to make much of New York’s unused pastures financially viable for family farmers who want to raise grass-fed beef.

The benefits of greater grass-fed beef production would be prodigious. Raising beef on grass would eliminate much of the foodborne illness plaguing the nation’s food supply. The beef raised on grass contains nutrients such as CLAs and omega 3 fatty acids, which are not typically found in animals raised in CAFOs.

Besides the health benefits there would be enormous environmental benefits. As Jeff Deasy the founder of American Feast points out, “The corn fed to cattle in CAFOs requires a great deal of fossil fuel to produce and poisonous pesticides are used in growing that corn. The tremendous amount of manure produced by the thousands upon thousands of tightly confined animals is another environmental hazard. In contrast, the manure from the cows on the Jaffe’s farm is a marvelous fertilizer for the grasses on which those cows feed.”

Panelists Andrew Taylor, owner of Diner and Marlow & Sons, and Chef Sean Rembold are set on a future of serving their customers fine, grass-fed beef and using the entire animal. They take delivery of whole animals from Slope Farms then age their beef to an extraordinary degree to maximize a rich flavor. They are committed to training their chefs to make use of the entire animal, even using the fat to fry potatoes. Their staff members visit farmers to deepen the food knowledge that gets applied in their kitchens. After the panel discussion those in attendance were delighted by the taste of the tender braised brisket they prepared.

“What price should we place on healthier families and a cleaner environment?” asks American Feast founder, Jeff Deasy.