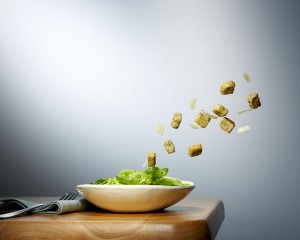 The salad’s creation is generally attributed to restaurateur Caesar Cardini (an Italian-born Mexican). Cardini was living in San Diego but also working in Tijuana where he avoided the restrictions of Prohibition. As his daughter Rosa (1928–2003) reported, her father invented the dish when a Fourth of July 1924 rush depleted the kitchen’s supplies. Cardini made do with what he had, adding the dramatic flair of the table-side tossing by the chef.

The original Caesar salad recipe  did not contain pieces of anchovy; the slight anchovy flavor comes from the Worcestershire sauce. Cardini was opposed to using anchovies in his salad.  And we’re opposed to using croutons.

In the book From Julia Child’s Kitchen, Julia Child describes how she ate a Caesar salad at Cardini’s restaurant when she was a child in 1920s, and some 50 years later she called Cardini’s daughter, in order to discover the original recipe. In this recipe, lettuce leaves are served whole on the plate, because they are meant to be lifted by the stem and eaten with the fingers. It also calls for coddled eggs and extra virgin olive oil.

About the only accomodation we need to make for The Silver Cloud Diet is to dispense with the toasted croutons.  Once you’ve reached goal weight,  you could certainly give yourself a crouton or two.

Keep lettuce chilled until time to serve.  The most dramatic way to present this salad, is the way Caesar Cardini did.  Get a big wooden salad bowl.  Come to the side of the dining table where your eager guests await and make the dressing before their very eyes.  Use a fork to whisk oil, garlic, salt and pepper together.  Drizzle in vinegar and lemon juice + Worcestershire.  Whisk again.  Add egg yolks and whisk thoroughly to make an emulsion.  Add parmesan cheese.  Its best to let the dressing stand a few minutes to let the flavors meld.  Add lettuce and turn until all sides are coated (You may want to do this one at a time), then transfer each quarter to a dinner plate.  If you wanted to get fancy you could top the salad with grilled chicken, or Italian tuna straight out of the can,  or poached salmon.  Now that’s lunch.

*Although the risk of salmonella is slight because the dressing is so acidic,  some who feel they have compromised immune systems,  nursing mothers, and little children and old people might feel more comfortable coddling the eggs.  Nothing could be simpler.  Heat water in a small sauce pan.  Add a teaspoon of vinegar.  Crack the egg and slide it into the simmering water.  Don’t let the water boil hard.  Cook just until the yolk has a film over it.  Lift it from the water with a slotted spoon.  You can use the whole egg or just the yolk, which should break nicely into a golden yellow yum.  Hold the egg in a small oiled bowl or ramekin until you are ready to compose the salad.