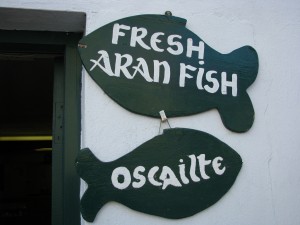 Leaves of thyme combine with plum tomatoes to create an instant sauce in this dish. Since the thyme crop has grown to feed the multitudes, all I had to do was pluck off som stems, pull the leaves off by pulling backwards, against the grain, and stir in the tomatoes. This is my kind of cooking.  Almost no cooking. I usually cook this in a grill pan on top of the stove. Too hot to go outside and grill right now. I guess you could say I’m a fair weather griller. But that grill pan? Ah. Thats too easy for words. And, as usual,  the success of this dish rests on the freshness of the fish. In Ireland last year, we ate fish until we grew gills, each one fresher than the last. Yum.
4 large plum tomatoes, coarsely chopped
2 shallots, chopped
3 teaspoons chopped fresh thyme
sea salt and cracked black pepper
3 tablespoons extra virgin olive oil
2 6- to 7-ounce atlantic cod fillets
12 Kalamata olives or other brine-cured black olives, pitted, halved
Combine plum tomatoes, shallot, and chopped thyme in small bowl. Season to taste with salt and pepper. Set aside. Drizzle 1 tablespoon olive oil over fish fillets on both sides. Preheat the grill.  Cook fish until opaque in the middle. Once you have turned the fish, spoon on tomato sauce on top. Sprinkle with olives. Drizzle fish with remaining olive oil. Serve on a warmed dinner plate.