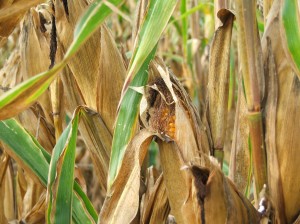 The corn lobby recently proposed re-naming high fructose corn syrup (HFCS) to corn sugar to help in ‘re-branding’ its image. HFCS has been linked to rising rates of obesity rates, among other things in North America although it is ubiquitously found in all processed food. As a result of this, the Corn Refiners Association have been getting quite a bit of grief for proposing this exercise in verbal gymnastics. So why am I writing about HFCS in an ethical consumption column?

First, a little history: HFCS started being manufactured in the 1970s because there was all this excess corn lying about and nobody knew what to do with it. Around the same time was when they started feeding grain to livestock in feed-lots, but that’s another story. Almost all the corn in the US is grown as a monoculture and vast quantities of this is genetically modified. Monoculture means maximizes yields, it also depletes soil nutrients and requires more pesticides and fertilizer while weakening topsoil. The environmental footprint of corn is high and proof of this is the Dead Zone in the Gulf of Mexico formed by pesticides runoffs from the Mississippi corn belt.

Further, converting grain into syrup requires milling  and chemical processes that alter the corn to starch and then to syrup – this is all very energy-intensive. The HFCS industry initially was just a ‘side’ business for the corn industry. However once food manufacturers discovered that it is a cheap substitute for sugar, it became a major industry in its own right. Heavy corn subsidies and tariffs on imported sugar have ensured that HFCS remains the cheapest sweetener – this is why it is being used in everything from ketchup to Twinkies to bread and soda. Michael Pollan author of ‘Omnivore’s Dilemma’ stated that 1-1.25 liters of oil are needed per bushel of corn  to create the pesticides, fertilizers, and tractor gasoline as well as to harvest, dry, and transport the corn. According to the USDA, the HFCS industry uses around 490 million bushels of corn per year.

With all the various health and environmental implications of HFCS, many companies are taking notice. PepsiCo now offers versions of Pepsi and Mountain Dew, made with sucrose. Dr Pepper recently introduced an anniversary edition of the drink that was made with real sugar. Coca-Cola made in Mexico where they still use cane sugar is more popular than Coke bottled in America where sugar is substituted with HFCS. Coke also introduces a ‘kosher’ soda for Passover that replaces HFCS with sugar. Kraft Foods markets Wheat Thins and other products as no longer containing HFCS. ConAgra does the same with Hunt’s ketchup.

However, cane sugar is not without its environmental impacts as well. In the US,  all sources have to be imported and unless it is fairtrade, sugar cultivation is also pesticide intensive. So reducing the amount of processed food is really the only way you can be green when it comes to sugar sources found in ready-made food. So where do you go as an ethical consumer to buy table sweetener that is sweet for both the earth and your body?

There are many options out there. Many food experts recommend stevia and xylitol as the best sweeteners. Early studies indicate that sustainable methods of stevia cultivation can be encouraged. Healthwise, it is found to have many benefits such as reactivating the insulin secreting cells in the pancreas. Xylitol naturally occurs in many berries and works better with the body’s natural metabolism.