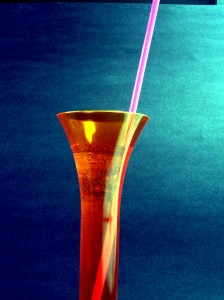 Wouldn’t want to break our low carb diet just because a hurricane hits now would we?  Lay in your supplies.  You know these hurricanes can go on for days.  Like a boy scout,  you gotta be prepared.

The cool thing about distilled spirits is this.  Even though they may be made from sugar, as is rum,  the distillation process leaves only alcohol which does have calories (heat energy) but does not have carbohydrates.  Let the winds roar.  Let the rain lash.  Sip your hurricane drink.  It’s legal.  ha.

Combine all ingredients, mix well. Pour over crushed ice in a hurricane glass. Best enjoyed through a small straw. Garnish with maraschino cherry and lemon wedge.

Cockspur Fine and Cockspur Gold Rum.  Cockspur has been producing fine Bajan rum for over 125 years.  The Cockspur Rums are distilled from molasses and Barbados’ own unique coral-filtered water and are aged in American oak bourbon barrels.  Using a combination of column distilled and pot distilled rums, each blend has its own unique characteristics.  Strut your stuff.

Want to know more about how Cockspur rums are made?

The beautiful island of Barbados has been producing rum for centuries. Originally known as “kill devil,” the drink was first recorded as “rum” by a visitor to Barbados in 1651. By that time over 200,000 gallons of rum were being produced each year. Barbados quickly took the lead in producing the finest quality rum, exporting large amounts to North America and Europe. George Washington is said to have a requested a barrel of Barbados rum for his 1789 inauguration.

Rum is made from the sugar cane plant— an integral and almost sacred part of Bajan culture. Legend has it that the spear-like flowers of the plant saved the island from a Spanish invasion, and the harvest of the sugar crop is celebrated each summer during the colourful “Crop Over”, a one-month-long festival.

COCKSPUR Rum was founded in Barbados in 1884 by Valdemar Hanschell, who came to the island via the Virgin Islands and founded a successful ship chandlery which, among other things, bottled rum. The premium rum began to be recognized internationally. He took on a partner and the company eventually became West Indies Rum Distillery, which still bottles COCKSPUR today.

It all starts with lush, green fields of high quality sugar cane. Harvesting takes place every year between February and June. After cutting, the sugar cane is crushed to extract the juice, which then goes through a carefully controlled boiling and centrifuging process to produce molasses and sugar. Molasses is the raw material that is used to make COCKSPUR Rum.

The molasses is then transported from the sugar factory to our historic beachfront distillery where the first stage in the making of COCKSPUR Rum occurs. Water, from natural coral-filtered underground springs at the distillery in Spring Garden, is added to the molasses along with a rare natural culture of yeast that was specially developed and propagated by COCKSPUR. Both the water and the yeast have a significant impact on the taste profile of the rum. The mixture is then allowed to ferment for about 48 hours, where the sugars are converted into alcohol. Once the fermentation has finished, this “wash” is now ready for distillation.

There are two methods of rum distillation: “Continuous” distillation or “Batch” distillation. Continuous still rum is distilled by a column still, and produces rum that is very light in flavor and body. Using copper pot stills, batch distillation is a longer process using smaller batches of “wash”. The process is conducted twice producing a double distillate rum that is more intense and robust than the single distillate. Pot still rums are full of aroma and flavour. Each pot still produces its own unique flavour profile and can be identified as the “heart” of the rum. This is what truly distinguishes COCKSPUR Rum from the competition.

All rum is clear when distilled. To produce a truly golden rum, the most important part of the process must now begin. COCKSPUR’s Master Blender oversees the transfer of the distillate into American oak barrels, which have been used previously in the aging of American bourbon. The rum is stored for many years, the length of time depending on the type of blend in which it will be used. In our aging bonds at the West Indies Rum Distillery, there are thousands of barrels in reserve at any one time, slowly mellowing the rum until our Master Blender is ready to use it in a blend of COCKSPUR Rum.

Once the rum has reached its maturity, which can only be determined by our Master Blender, it is then ready to become a blend of COCKSPUR Rum. At this point the matured single and double distilled rums, from different ages, are blended together to produce COCKSPUR Fine Rum and COCKSPUR 12 Rum. COCKSPUR Fine and COCKSPUR 12 use both continuous and pot still rums of various ages in their blends. The specific quantity of each type and age of rum used is determined by our Master Blender following recipes created many years ago by our founder and passed on through the generations from one Master Blender to another. Each blend is left to marry for a few days, after which pure water is added to reduce the rum to bottling strength.