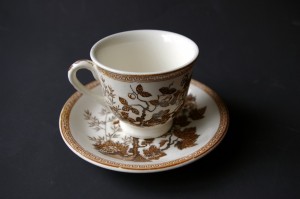 During prohibition, when alcohol was hard to come by, certain enterprising restauranteurs figured a way around it. One of those was a smart, amusing businesswoman in Tucson, Arizona named Monica Flinn, who in 1922, opened a restaurant called El Charro cafe. The idea that she could make a living in the teeth of prohibition was absurd. In fact, her creditors had her on such a short string, she would borrow money from the grocer, cook the night’s recipes, then pay the grocer the next day.

And if that wasn’t difficult enough, ladies in those days, were supposed to be chaste and pure and eschew alcohol all together. (Anybody caught Boardwalk Empire on HBO? See those temperence women with the placards? That was 1922).

But Monica Flinn, one of the original dames, and a flambuoyant character who dressed colorfully and worked the dining room floor with a parrot on her shoulder, liked marintis and she knew lots of other women who did too.

So, in that moment in time, Monica Flinn came up with a brilliant idea. She would serve a special “tea” to her customers, especially the ladies. Martinis in teacups ensued. And for those who had travelled to Mexico and gained a taste for it, she’d serve them straight tequila in the tea cup.

This idea caught on, and has become a tradition in Tucson, Arizona. You can still get a drink in a teacup at El Charro Cafe (www.elcharrocafe.com), or this weekend, in the midst of the Tucson Culinary Festival, you can buy a chance to toast Monica Flin at the Tequila Teacup Toast to benefit the Monica Flin Scholarship Fund which has been created to award promising students in the culinary field. Each entrant gets a china teacup and their own special “tea”, a straight shot of top shelf tequila. Oh yes. And if you’re in Tucson for any reason, stop by el Charro Cafe, still a family business, now operated by the equally colorful neice of Monca Flin, a certain Mz. Carlota Flores whose restaurant is her home, whose food is incredibly good, and who is, like her aunt, one of the world’s great characters.

El Charro invented the chimichanga (known as the thingamajig) and the dried beef taco.

As for me, I intend to begin meals at the Maplewood Dining Club with tequila in a teacup. That will separate the ladies from the dames right quick. And that’s a good thing.