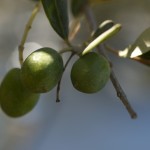 Three guys walked into a bar and – oh you’ve heard that joke.  But this is a true story. About 12 years ago three guys walked into a bar in Spain, one was an engineer who designed equipment for the grape harvesting business, the second was a nursery operator who supplied both grape stock and olive trees to the trade, the third guy was a money man. So the nursery guy said he wished he could sell more trees, the engineer said he needed to hybridize his olive trees to resemble grape stock, and they money man said, keep talking.

Before that night was over they had hatched a plan they sketched out on a cocktail napkin to revolutionize the olive oil business. And it started with smaller olive trees, trellised like grapes, that could be harvested like grapes using full mechanization, and finished with milling the oil right in the field. The money man said keep going. The engineer was sketching on a cocktail napkin. The nursery guy was thinking out loud. They said where could we build such an operation?

Not Spain said one, its built out. Not Greece said another. One by one they rejected a number of countries including Australia and South Africa. How about Northern California? Bingo. They agreed that might just work.

And now, some 12 years later, with a 10 million dollar investment, they believe they might just have something: a business model that supplies first rate oils to Americans at reasonable prices.  After tasting their olives, we tend to agree.

Then they began scouting land to locate such a high density, mechanized olive operation. They considered several options. At last they decided Northern California with its poor rocky soils, sunshine, and bustling wine business might just be the spot. They shook on it. They pooled their money to come up with 10 million dollars and they went to work.

Now, some 12 years later, a crew of about 50 people are controlling the largest olive oil business in the U.S. Phew. Now that was work. Now, they see their job as educating Americans to understand their product and why they’re better off buying California extra virgin olive oil, than product imported from Europe or Australia. It’s one of those big, grand gestures that may or may not pay off. But they are hopeful. And after tasting their oils, I’m convinced they can succeed. It’s just a matter of making the public aware of what we have right here in Sunny California.

First of all, what is extra virgin olive oil? It’s the first, cold pressing of the olives. It’s that ismple.  And the closer the olives are milled from the time they are harvested the fresher and better the product. Because, as one of the COR execs explained, true EVOO is fruit juice, plain and simple.  the fruit juice of the olive.

So how does mechanization help? Again, it draws from other more ancient models. I’ve seen cabbage being whacked into shards in the fields in France. I’ve seen chickens being whacked into McNuggets next to the coops in Arkansas. And now, in California, they’ve adapted these giant grape harvesting machines that bear a striking resemblance to Star Wars warriors, that hunch over rows of trellised 5-6 foot olive trees, hybridized to resemble a really bushy bush, which crawl down the row, shaking olives into a trough from which they are put into a bin then, with an hour or so, transferred to a mill that overlooks the olive grove and made into olive oil before the sun sets.

The mill itself is a wonder of computer monitoring, and high tech design. The machines inside, made in France, make it possible for a few highly trained employees to oversee the production of huge quantities of oil. The brilliant grass green oil goes into enormous – yes I said enormous – stainless steel vats to rest and settle out so the sediment sinks to the bottom and the oil rises to the top. The pits are sold for cattle feed. The only thing they haven’t bottled and sold is the aroma of the crushing olives, which is ashame, because the smell inside that mill is completely intoxicating,  grassy, and fresh, and fecund with the promise of the freshest olive oil around.

Although they haven’t rolled out the product nationwide, you can buy it in select grocery stores coast to coast under the California Olive Ranch brand in squat dark green bottles, as well as private labelled by some of your favorite high end natural foods stores, which shall here in go unnamed.  Suffice it to say if  you see a private label in one of those stores and it says “made in California”,  there’s a good chance it came from COR. Check out their website, for more pictures, some recipes, and mail order sources for product. It’s an idea whose time has come. I’m gonna be talking more about this product and why its not only good for your palate, but also good for your health. Bon appetit.

In coming sessions, I’ll share some of the stupendous recipes the California chefs have invented to show case these products including a stunning olive oil ice cream that is simply stunning. Stay tuned.