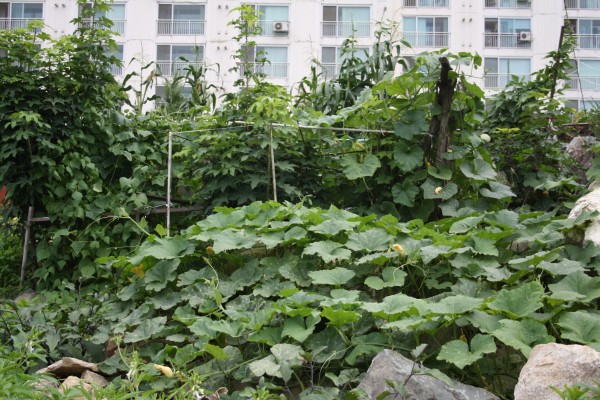 This good food evolution has usually been started by grassroots individuals who grew up in rural communities and now live in cities. September 13, 2010 | from: Alternet, Grace Lee Boggs

“Every year 76 million cases of foodborne illnesses occur, leading to about 300,000 hospitalizations and 5000 deaths.” (New York Times, Sept. 4, 2010) That’s because most Americans still believe we have no alternative to the food produced by agribusinesses who care as little about our health as they do about the health of the chickens, turkeys, cows and pigs, so tightly packed in pens and cages on factory farms that the floor is scarcely visible, and where visible, is covered with excrement. Fortunately, another healthier agriculture has been emerging in the last few decades. This good food evolution has usually been started by grassroots individuals who grew up in rural communities and now live in cities. In Detroit, for example, African American elders raised in the South saw the vacant lots in our deteriorating neighborhoods not as blight but as opportunities to plant community gardens that would also give city kids a sense of the time and patience that are a normal part of country life and that human beings now need for our continuing evolution.

Detroiter Gerald Hairston, who grew up in W.Virginia. brought these elders together, and called them “Gardening Angels.” When we started Detroit Summer in 1992, a program to involve Detroit youth in rebuilding, redefining, and respiiriting Detroit from the ground up, these Gardening Angels provided the agricultural experience and skills needed to reconnect city youth with the Earth. Out of this reconnection of country and city, of oldsters and youngsters, the Detroit urban agricultural movement was born. Now there are at least 1300 community gardens in Detroit, and almost every week another producer or writer requests our participation in a news feature or documentary highlighting the role of urban gardening in the rebirth of Detroit. The weekend of September 10-12, people from all over the country and world, including a delegation of Detroit urban gardeners, attended a Good Food revolution conference at the Wisconsin State Fair Park in Milwaukee, convened by Growing Power.

Growing Power was founded by Will Allen, the son of a South Carolina sharecropper and the first African American to play on the University of Miami basketball team, who never forgot that the people in rural Maryland where he grew up always had plenty to eat ,even if they lacked fancy clothes. So when he retired from pro basketball, he bought a few acres in Milwaukee, and founded Growing Power. Today this farm and community food center provides fresh produce for thousands of Milwaukee residents, attracts visitors from all over the world to its workshops in urban agriculture and aquaculture, and has inspired the many neighborhood gardens and small businesses that are at the heart of Milwaukee’s Renaissance. The May 2010 issue of TIME Magazine included Will among the world’s 100 most influential people. At the September 10-12 Conference, delegates shared information about how to create a new food system that builds better health and more closely-knit communities.

Workshops were given in Urban and Small farming, Urban Aquaculture, Brownsfield Development, Renewable Energy and Experiential Education to involve schoolchildren in the movement for more nutritious food. Among the speakers were Will Allen, Winona LaDuke, an Objibwe activist who is executive director of Honor the Earth, Children’s Health specialist Dr. Judith Palfrey, and myself, who spoke via Skype from Detroit.

The Good Food evolution is an inspiring example of the “Next American Revolution.” It’s been a “Quiet Revolution.” People have been simply exercising the power we have within ourselves to live more simply for the sake of our own physical and spiritual health and the health of the Earth and other living things. But the Milwaukee conference makes clear that this evolution is gathering momentum. It is an idea whose time has come. Grace Lee Boggs has been an activist for more than 60 years and is the author of the autobiography Living for Change.