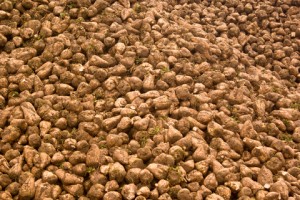 Sometimes,  things just come right. One brave judge has put his foot down and said NO to modified sugar beets. The growers are screaming that the price of sugar will go through  the roof. There won’t be enough Roundup to go around to poison the ground.  Oh my. What a shame. Sugar will be more expensive? The earth will not be poisoned this spring? What a shame.

I personally may write Judge Jeffrey White of Northern California a fan letter. It takes a brave man to stand up to Monsanto, the USDA, and all the corporate interests who conspirre to poison Americans and line their own pockets. But here’s one judge who did it. Read this piece and laugh with us.

We are so on the right track with The Silver Cloud Diet.  Nobody needs to be eating sugar. Let the price soar.  We don’t care.

By PAUL VOOSEN of Greenwire

A federal judge ordered the destruction last night of a batch of genetically modified sugar beets that he said had been planted illegally with the approval of the Agriculture Department.

Pending a stay by an appeals court, the beets developed by Monsanto Co. will be ripped from the ground next week.

Late this summer, USDA authorized nursery plantings of the beet seedlings, called stecklings, that would provide seed for hypothetical future crops, pending their approved use. The planting came soon after a federal court ordered that the widely grown Roundup Ready beets, approved for broad commercial use by USDA for several years, must return to controlled status pending further environmental review of the impact their growth has on organic seed growers and the environment.

U.S. District Judge Jeffrey White found USDA’s authorization of the young beets without even a partial deregulation was highly suspect. “The legality of [the] defendants’ conduct does not even appear to be a close question,” he wrote. Therefore, he added, the seedlings “shall be removed from the ground.”

The order is the most recent turn in a series of suits over the beets, engineered to resist the common herbicide glyphosate. Last year, White ruled that USDA had violated environmental laws by not conducting a full review before approving the crop in 2005 (Greenwire, Oct. 8, 2009). White allowed cultivation of the crops to continue temporarily, but he warned that future beet harvests would likely need to rely on conventional seed, a warning he backed up with a ruling this August returning the beets to regulated status.

White, who serves on the U.S. District Court for the Northern District of California, expressed particular irritation that USDA, Monsanto and its beet partners had not better prepared for the beets’ return to regulated status. They waited almost a year after his first ruling before seeking to enact interim measures, a delay that exacerbated the harm that could result from the beets’ destruction.

USDA and the beet industry “created this problem,” White wrote. “They delayed in seeking or implementing interim relief despite knowing in September of 2009 that the court found [USDA] unlawfully deregulated sugar beets and thus, at a minimum, a vacature of the decision was highly likely.”

Farmers quickly adopted Roundup Ready sugar beets after USDA’s first deregulation, and the beets have come to dominate the United States’ billion-dollar beet market, which supplies about half of the country’s sugar.

White’s decision, the beet industry warned, could harm future availability of the modified beets. Such fears, however, are “greatly exaggerated,” White noted, given that stecklings planted prior to Aug. 13 would not be destroyed.

White’s ruling is a victory for Earthjustice and the Center for Food Safety, which have long opposed the beets and successfully sued to force USDA to conduct an environmental impact statement (EIS) on their use. USDA estimates the EIS will be completed by May 2012.

The organizations were joined in their case by several organic seed producers from Oregon’s Willamette Valley who feared the modified beets could crossbreed with closely related Swiss chard, complicating exports to markets wary of modified crops.

“USDA thumbed its nose at the judicial system and the public by allowing this crop to be grown without any environmental review,” Earthjustice’s lead attorney, Paul Achitoff, said in a statement. The department, he added, “has shown no regard for the environmental laws, and we’re pleased that Judge White ordered the appropriate response.”