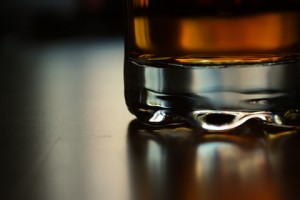 Bottoms Up Friday, and the damn snow is back. Again.  On with the snow boots, button up the coat, out into the cold to shovel yet again.

But after this ghastly deed,  I’m taking my lead from Anthony Bourdain, whose new tell-all book Medium Raw, (ecco, Harper Collins 2011)about the food business and the dark side the public isn’t always privy to, kept me up reading until 3 a.m. Order this book TODAY.  Its a great read and as eye-opening as his first one, Kitchen Confidential.

Bourdain talks about the nightly prowl that food providers begin after their restaurant has closed for the night.  Most are too jacked up to go home and go to bed, so they prowl after-hours haunts only they know about,  knocking back shots of Fernet, so they’ll be able to get up again the next day and go to work again.  Trust me when I tell you,  they do not think about a low carb cocktail, but that’s what they’ve made.

But never mind.  The snow kept falling.  The light came.  The law here in Maplewood, NJ is you have six hours to clear the sidewalk in front of your house of snow before you get a ticket,  so out I went to shovel.

But once I got back in the house,  I thought about that Fernet, and what the insiders in the food business say about it.  I’ve baptised many people at my table with a shot of Fernet at the end of a meal, especially the ones I take to Italy.  It’s the ultimate insider’s drink, and with only 2 grams of sugars per shot,  if you chase it with diet Ginger Ale,  or, as the Argentineans prefer, diet coke (God help me, it’s the truth),  you’ll feel better for it.

Fernet (Italian pronunciation: [fɛrˈnɛt]) is a type of amaro, a bitter, aromatic spirit. Fernet is made from a number of herbs and spices which vary according to the brand, but usually include myrrh, rhubarb, chamomile, cardamom, aloe, and especially saffron, with a base of grape distilled spirits, and colored with caramel coloring.

Here’s what one bar tender in San Francisco, who signs himself merely Logan B, has to say about it.

“ The easiest way to explain the taste is to imagine Jägermeister without the sugar. You shoot it, immediately getting a strong hit of mouthwash – drying the mouth out, stinging the tongue. It’s kind of like getting hit in the nose. Your brain hurts, your eyes sting and water, you cough a bit. Then, as soon as it begins, a warm wave of relief washes over and you are left baptized in Italian herbals and golf ball eyed awake.

“To be honest with you, this is a bartender’s drink. It’s dark, disgusting, vile, evil and unabashedly brilliant. It s possibly the worst thing you can ever drink and possibly why bartenders drink it. We have a choice of anything at the bar and time after time we go for the Fernet. The point being is that we’ve trained ourselves, with grimaces and pride to like this black sludge. To pass it on to our friends and hapless passer byes – and give them a glimpse into the secret world behind the bar. If anything Fernet is more than a drink, it’s a nod, a handshake, a coded message that lets the pourer and imbiber know of a special club that not everyone can enter. A challenge that not all can face, but yea to those who walk in the valley of the shadow of death”.