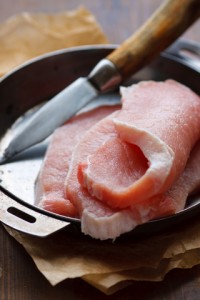 I had a serious change of heart, and it happened when I realized my aversion to meat wasn’t solving the animal welfare problem I was protesting about.

I was a vegetarian for a long time – the bulk of my adult life, actually. When I realised how most of the steaks got to my plate (and how pumped-full of antibiotics and growth hormones they were), I put down my fork and took a vow to never be a part of that system again. My research into the brutal American factory farm system and its effects on the environment was a life-changing stumble down into the rabbit hole; I discovered a twisted world of assembly-line death camps, crippled animals, radiated carcasses and festering diseases. I don’t have to get into the specifics, but clearly it wasn’t a compassionate way to get my suggested 46 grams of protein a day. So I stopped eating meat, cold Tofurkey.

Nearly a decade later I’m no longer a vegetarian. In fact, I couldn’t be further from the produce aisle. Nowadays I own and operate a small farm where I raise my own chicken, pork, lamb, rabbit, turkey and eggs. I had a serious change of heart, and it happened when I realised my aversion to meat wasn’t solving the animal welfare problem I was protesting about. My beef, after all, wasn’t with beef. It was with how the cow got to my plate in the first place. One way to make sure the animals I ate lived a happy, respectable life was to raise them myself. I would learn to butcher a free-range chicken, raise a pig without antibiotics and rear lambs on green hillside pastures. I would come back to meat eating, and I would do it because of my love for animals.

You are showing them you are willing to sacrifice more of your paycheck to dine with dignity. As people are made more aware of this beautiful option, farmers are coming out in droves to meet the demand. Farmers markets have been on a rapid rise in the US thanks to consumer demand for cleaner meat, up 16% in the last year alone.

It’s a hard reality for a vegetarian to swallow, but my veggie burgers did not rattle the industry cages at all. I was simply avoiding the battlefield, stepping aside as a pacifist. There is nobility in the vegetarian choice, but it isn’t changing the system fast enough. In a world where meat consumption is soaring, the plausible 25% of the world’s inhabitants who have a mostly vegetarian diet aren’t making a dent in the rate us humans are eating animals. In theory, a plant-based diet avoids consuming animals but it certainly isn’t getting cows out of feedlots. However, steak-eating consumers choosing to eat sustainably raised meat are. They chose to purchase a product raised on pasture when they could have spent less money on an animal treated like a screwdriver.

“There is a fundamental difference between cows and screwdrivers. Cows feel pain and screwdrivers do not.” Those are the words of Temple Grandin, the famed advocate responsible for making the meat industry aware of animal suffering. But how many of us consumers think of that steak in the plastic wrap next to the breakfast cereal and laundry detergent as just another object? A product as characterless as a screwdriver? We seem to be caught in a parted sea of extremes when it comes to how we see food – either we’re adamant about where our food comes from, or completely oblivious. I don’t think the world needs to convert into a society of vegans or sustainable farmers, but we do need to live in a world where beef doesn’t just mean an ingredient; it means a life loss. I never thought of my beans or hummus like that. Now every meal is seasoned with the gratitude of sacrifice. For me, it took a return to carnivory to live out the ideals of vegetarianism. Food is a complicated religion.

It may mean spending more money, but the way small farmers raise their sheep, goats, cattle and hogs on pasture is the polar opposite of those cruel places where animals are treated like a cheap protein and “quality” is a measure of economic algorithms, not life. If cruelty is bad for business, business will simply have to change. When consumers demand a higher quality of life from the animals they eat, feedlots will become a black stain of our agricultural past.

I’m sorry my vegetarian friends, but it’s time to come back to the table. You can remain in the rabbit hole and keep eating your salad, but the only way out for good is to eat the rabbit.

Jenna Woginrich is a former urbanite, shepherdess and current farm writer. She writes the blog Cold Antler Farm and is the author of the book, Made From Scratch: Discovering the Pleasures of a Handmade Life.