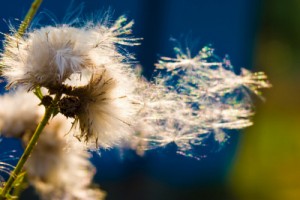 The symptoms experienced by nearly 40 million Americans with allergic rhinitis (red, itchy eyes, runny nose, sneezing, sinus headache) can be either seasonal, in the case of “hay fever” or perennial (year round) such as an allergy to house dust. While rarely life-threatening, allergic rhinitis leads to periods of misery, sleep loss, and lack of productivity at work, school, and life in general.

Allergens can be any substance (usually a protein), that can elicit an IgE (antigen-bound immunoglobulin E)-mediated response.  Perennial allergens would include things such as mold spores, dust and dust mites, animal dander (especially cats), and specific chemicals (cleaning agents and certain powders). Some of these allergenic compounds are small enough to penetrate into the bronchial tree when inhaled and often trigger asthmatic reactions. Seasonal allergies will typically follow a predictable pattern based on the growing season. The summer months are typically the time for grass pollen allergies, as well as fungal spores, which are high at all times except during times of snow cover.  While reactions to airborne allergens are very wide-spread, certain individuals are much more susceptible than others.

Quercetin’s potential affects on allergy-related pathways is unmatched by other natural substances.  One of the best studied effects of quercetin is its ability to prevent mast cells from de-granulating during an allergic response. In preventing mast cell de-granulation, quercetin prevents the release of histamine, one of the major triggers to the overall allergic response.  Quercetin is extremely safe, and includes many other documented benefits (antioxidant, anti-inflammatory, capillary stability etc.)

Stinging Nettles Leaf has been shown to be effective when used for hayfever.

N-Acetyl Cysteine (NAC) is a precursor to one of the bodies most potent antioxidants, glutathione. NAC breaks (reducing) the disulphide bonds in mucus of the intestines and especially the lungs, making mucus less viscous.

Vitamin C (as Ascorbic Acid) One of the most talked about vitamins in recent decades, vitamin C activity was first identified hundreds of years ago for it’s ability to prevent and treat scurvy. There are few conditions today for which Vitamin C has not been promoted for, and in many cases had some effect.

Bromelain is the term used to describe a group of enzymes derived from the stem and fruit of the pineapple plant (Ananas comosus). As a plant enzyme, Bromelain has many advantages and uses as a supplemental ingredient. Bromelain has an “Approved” status by the German Commission E for micro inflammations (allergic reactions, localized internal infections). Other activities associated with Bromelain include inhibition of platelet aggregation, decreasing the viscosity of mucus (mucolytic), antibiotic activity and smooth muscle relaxant.

Dr. Salerno’s Probiotic Factor contains a proprietary blend of 20 billion CFU (Colony Forming Units).  A carefully assembled cast of probiotic organisms arrayed to meet our diverse population’s needs, each strain has a slightly different profile to maximize the environment for strains already in the gut.

It is well established that gut microflora has a profound influence on overall human health; and the use of health-promoting bacteria, known as probiotics, in fermented foods and dietary supplements is wide-spread and growing.

When your immune system is working well, it can combat the allergens in the air. Thus, if you begin to take probiotics as a part of your daily supplement program, you may find that the allergies you have suddenly gained are now no longer a problem. In addition, studies have shown that taking probiotics all year long may help you to avoid having allergy attacks at all.