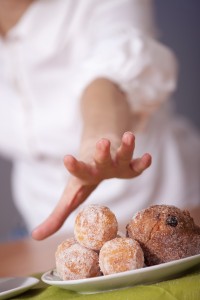 A craving is defined as “an intense desire to consume a particular food (or type of food) that is difficult to resist.” Is this how you feel about carbs? The more you eat them, the more you crave them? Welcome to the carbohydrate roller coaster; you are drawn to cookies, donuts, bread, pasta, chips and French fries, and once you soothe your craving, you’re hungry again after a couple hours. And, unfortunately, it’s the over-consumption of these carbs that raise and drop your blood sugar levels, and contribute to the extra pounds you are trying so hard to lose. As you’ve learned on The Silver Cloud Diet, decreasing your carb intake offers a variety of benefits, including:

There are countless real-life testimonials to support the benefits of consuming fewer carbs, and now there’s new science that backs this. A recent study in the journal of Obesity, called “Change in Food Cravings, Food Preferences, and Appetite During a Low-Carbohydrate and Low-Fat Diet”, randomly assigned 270 obese men and women to a low-carb or low-fat diet for two years. The low-carb group limited their carbs and ate foods higher in fat and protein. The low-fat group’s diet consisted of 15% of the calories from protein, 30% from fat and 55% from carbs. During this time, the researchers measured the participants’ cravings for specific types of foods (sweets, high-fat, fast food and carbs), preferences for high-sugar, high-carb foods or low-carb/high-protein foods and appetite levels. According to the researchers “Compared to the low-fat diet, the low-carb diet had significantly larger decreases in cravings for carbohydrates/starches and preferences for high-carbohydrate and high-sugar foods. The low carb diet group reported being less bothered by hunger compared to the low fat diet group.” Interestingly, the low-fat diet group also experienced fewer cravings for high-fat foods and a decreased preference for low-carb/high-protein foods. The bottom line? “Prescription of diets that promoted restriction of specific types of food resulted in decreased cravings and preferences for the foods that were targeted for restriction. The results also indicate that the low carb diet group was less bothered by hunger compared to the low fat diet group.”

What This Means To You

Initially, it sounds crazy to restrict the foods you crave the most. You would think you would end up craving them even more. But this study shows that the fewer carbs you consume (especially when you are consuming fat and protein in their place), the less you will eventually crave those carbs and the more you will be able to control your hunger. What this means to you is that, if you have challenges conquering your carb cravings or have a hard time just processing carbs in general, science once again shows that The Silver Cloud Diet could be the best fit for you.