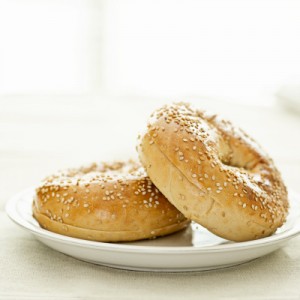 We all know that sugar and simple carbs are fattening. Many are now also aware of their addictive properties for certain genetically disposed people. Studies on rats have shown that they develop withdrawal symptoms, including a drop in body temperature and aggression when sugar is added to their diet and then suddenly removed.

Bagels are one of the most popular breakfast foods for busy New Yorkers on the go. The amount of calories in the typical bagel (300-400 calories) should hold you over until lunch. So why is it that you still end up with the 10 AM munchies befriending the vending machine? Well, a meal consisting of a bagel is high in carbohydrates only. This macronutrient suppresses the hunger hormone ghrelin quickly, causing you to feel satisfied just after eating. That instant gratification in response to eating simple carbs unfortunately comes at a price. Simple carbs drive down ghrelin initially, but this hormone then rises within a few hours to above normal levels; causing you to feel even hungrier than when you started eating in the first place!

A meal rich in proteins does not suppress ghrelin as quickly as a high-carb meal, but it promotes a longer satiety. You may not feel as satisfied immediately after eating an omelet as you would, had you chosen the bagel, but eventually you will, and the sensation lasts for hours with no dangerous spikes and crashes in your hunger hormones.

This also explains why studies done on human have shown that those who ate a breakfast containing 2 eggs ended up ingesting fewer calories throughout the day than those who ate a high-carb/low-protein breakfast.

Remember that the key to lasting weight-loss is not relying on fragile willpower that changes as the wind blows, rather it is focusing on foods that cut cravings, suppress hunger hormones and optimize your metabolism by increasing your dopaminergic system.