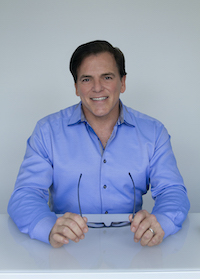 Lauded as an international pioneer in the field of anti-aging, Dr. John P. Salerno is a leader in the practice of complementary medicine.

Based in Manhattan, Dr. Salerno has been cited as an expert by national media outlets, retained as a consultant by world-renowned medical luminaries for the launching of treatment facilities across three continents, and referenced by Suzanne Somers in her #1 New York Times bestseller, Ageless, and in her 2009 follow-ups, Breakthrough and Knockout. Somers told an audience in 2006, “I will personally send patients to Dr. Salerno.”

Dr. Salerno is the founder of the state-of-the-art New York Anti-Aging Institute scheduled to open in 2010 and the Salerno Center for Complementary Medicine established in New York City in 2005.

Best known for his weight-loss treatments, bio-identical hormone replacement, vitamin IV suites, and chelation therapy, a process that removes heavy metals from the body, Dr. Salerno lists dozens of celebrities among his patients. He combines the teachings of traditional medicine with the wisdom of alternative healing to cleanse the system of toxins and blockages that can cause heart disease, cancer, brain dysfunction, diabetes and others. He boosts the body’s immune system with products chosen from a line of natural vita-nutrients that he created in conjunction with Dr. Hiroyuki Abe, president of The International Society of Integrative Medicine and owner of the Kudan Clinic in Japan.

This diet doctor builds on the legacy of Dr. Robert C. Atkins, who revolutionized dieting, and with whom he worked at The Atkins Center for Complementary Medicine. Dr. Salerno inherited many of Dr. Atkins’ patients upon Atkins’ death in 2003 and many of them remain with him to this day. Dr. Salerno has continued to refine the doctor’s prescriptions for smart and effective low-carb dieting and maintains a strong professional relationship with Dr. Atkins’ wife, for whom the Robert C. and Veronica Atkins Foundation for disease prevention and health management is named. Dr. Salerno is co-author along with James Beard award winning author, Linda West Eckhardt of a book entitled Dr. Salerno’s Silver Cloud Diet, The Sustainable Diet for the 21st Century, which postulates that a diet rich in saturated fats, ample whole, organic proteins and appropriate servings of organic fruits and vegetables will not only aid the patient achieve weight loss goals but will also improve health.

After the terrorist bombings of September 11, 2001, Dr. Salerno served as the Medical Director for the World Trade Center Landfill, a position that earned him a commendation from then-mayor Rudy Giuliani. In this capacity, he was charged with monitoring the health of the public workers assigned to manage the landfill where debris from the World Trade Center was transferred.

Prior to holding this position, Dr. Salerno worked in family practice and urgent care at locations in Florida and New York and served as Medical Director of St. Vincent’s Immediate Health Care in Shelton, Connecticut. From 1994 to 1996, he served as a preceptor at the Yale School of Medicine.

Dr. Salerno was nominated to the America’s Registry of Outstanding Professionals in 2002.