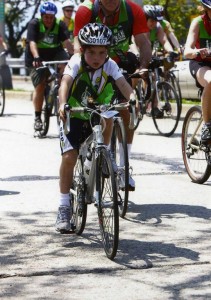 On May 3, 2010, 6-year old John Salerno rode the 44-mile TD Bank 5-Boro Tour of NYC, the largest mass-cycling event in the USA. He joined 32,000 riders of all ages, seeing New York from a new vantage point.  This pint-sized powerhouse, born and raised in Fairfield, CT, has been cycling for half his life – since the age of 3.

According to his mother, Helene, “He got into cycling… riding his BELOVED WHITE TREK BIKE… watching Le Tour De France, Lance and his movie, reading Lance’s book, going to the Trek store and playing there under the loving eyes of store owner.Indeed, the owner let him try his beloved white bike for almost 6 months!!

“John was 3 and kept on insisting that I take him to the Post Office and get some mailing stickers, so he could put them on his bike. I asked him, ‘Why do you want many post office stickers on your bike?’ John replied in very serious voice and a frown, ‘I need a sponsor for my bike… just like Lance Armstrong, Mom!!'”

Helene credits his father, noted New York diet doctor, John Salerno, D.O, , herself, and Trek dealer, Lou ___, for the boy’s warm and steadfast embrace of the sport. His biggest inspirations? “The Boss,” Lance Armstrong, and his father, Dr. Salerno.

Dr. Salerno began grooming his children for a life of good health early. “I put supplements and vitamins in their bottles.  John and his sister, (fill in name here), eat a healthy diet filled with organic, whole foods, plenty of high quality protein and saturated fat for brain development and stamina. See www.thesilverclouddiet.com for more information on Dr. Salerno’s diet.

Dr. Salerno, as little John’s primary trainer,  rides bikes with the boy to school daily, and stretches out for longer country rides on the weekend. “He’s really amazing,” says Dr. Salerno.  “He can ride circles around me.”

As would be expected, little John hopes to grow up to be like Lance – only, he may have the leg up on many other children! He hopes to be a cadet in the Tour de France, which offers summer training to 16-18 year olds! Thanks to his Parisian mother, Helene, he’s already fluent in French, so his time on Le Tour, chatting with the locals, will be easy.

What’s John up to next? Le Tour de Montreal which is 36 km June 6 with his dad.

Of course, we have a feeling that there will be another “Le Tour” in John’s future!

He’s not just a roadie!

Allen Lim would be proud!