The confusion about soy continues as folks see ads on television extolling the health virtues of soy products, and conventional wisdom points to lower 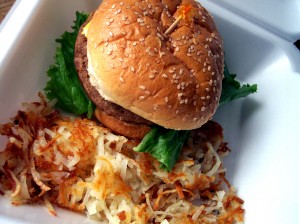 incidence of cancers among Asians who count soy as a part of their diet.  Americans trying to do the right thing may order a soy burger instead of a beef burger.  Is this the right thing to do?

Neither of these pieces of data take into account the known facts about soy in the American diet.  We do have a controlled study going on with a population that is forced to eat what’s put before them, and that’s the prison population in the state of Illinois, whom I have written about before.

Put on a steady diet of cheap soy burgers, et al, the prisoners immediately develop health problems.  They gain weight.  Are you listening dieters?  GAIN WEIGHT.  Secondly, come digestive troubles because ordinary soy is almost impossible for a human or an animal to digest. Ergo the flatulence among cattle, so often written about, so seldom explained.

These health problems escalate in the prison population causing reduced libido (too much estrogen).  If this diet is fed to young children, the little girls may experience premature puberty and the boys may not develop properly sexually.  Pumping animals full of estrogen makes them grow faster.  Pumping it into human beings may cause mischief we can’t even begin to understand.  Did anybody say breast cancer?  Prostate?  I’m just saying.

So, every time I think soy can’t possibly get any worse, a new study proves me wrong. The latest research shows just how much this dangerous non-food actually is.

Researchers have found that soy plants actually absorb toxic chemicals right out of the groundwater and then store them inside the soybeans. Surprise, surprise.

Researchers from the University of Toledo in Ohio grew two sets of soy crops: One in soil tainted with common pharmaceuticals, and a second irrigated with water contaminated with three drugs (carbamazepine, diphenhydramine, and fluoxetine) along with the two widely used antimicrobial compounds that I’ve been warning you about: triclosan and triclocarban.

Don’t think for a moment that the study in Environmental Science & Technology was some overblown lab simulation, because U.S. waters are overflowing with this crap and so much more. Studies have consistently found antibiotics, sex-change hormones and rocket fuel in our water, just to name a few.

In other words, the “contaminated” water in this lab experiment was probably  CLEANER than what’s actually used to irrigate the soy fields!  And the researchers didn’t even explain whether or not the seed was GMO.  Doesn’t matter.  Soy is practically a non-food, and should not be a part of any living creature’s diet, with the notable exception of fermented soy as grown in Asia.

That’s right — those are the same beans that are found in everything from common packaged foods to animal feed served in feed lots and fish farms. And if the cows and chickens and pigs and farm-raised fish  are eating it, so are you, if you eat their meat and drink their milk.  And if you are an American vegetarian,  just read the labels on the veggie burgers et al.  It’s enough to give you gas.

Which, by the way, is a common complaint of people on a “plant-based” diet.  Gas.  Flatulence.  Weight gain. Malaise.  Ugh.

The study also found both antimicrobials and carbamazepine in root tissues, stems and leaves — something to remember next time you hear a vegan push soy leaves as the next big green for your salad.

But of course, even “clean” soy raised in perfect conditions will give your body a massive estrogen kick — and that’s why all that soy in the food chain is directly responsible for much of our overall poor health. If you want to keep your family safe, keep soy off the plate.  Period.  Read labels.  Avoid processed foods.

Say to yourself this mantra:  estrogen makes me gain weight.  soy is loaded with estrogen.  Need I say more?

And whatever you do, do not feed soy formula to babies and small children.  Childhood obesity begins in the baby bottle.   I can tell you that.  Don’t be a part of that problem for your own children.