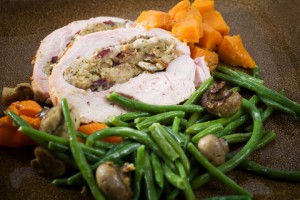 Yes, Virginia,  it is possible to create a low carb turkey stuffing.  And,  it is possible that it will taste just as good as grandmother’s old fashioned made with biscuits, cornbread, and/or bread.  The trick is to find a suitable substitute for all that forbidden starch.

To this end,  I set out to create a sumptuous turkey breast stuffed with yummy things.  At first,  I didn’t think much about the turkey.  I just snatched up the free one at the grocery store,  bought the stuffing ingredients and sailed into the kitchen with nary a care in the world.

First off,  I’d say,  don’t let someone con you into boning out a turkey breast yourself.  Unless you’re a butcher,  you will not like this job.  However,  if you should choose to accept this assignment,  sharpen your best long, skinny boning knife, and go at it,  cutting down the back of the breast, breaking the breast bone, then peeling the meat away from the bone as carefully as you can.

The leftover carcass makes a dandy soup stock.  Just throw it in the pot, along with any extra fat, a bay leaf, a carrot, celery, pepper corns and water to cover.  Simmer a couple hours and you’re ready for great soup.

But as for me,  I vowed after all that wrestling with the beast that next time, I’d ask the butcher to bone and butterfly the breast for me. So anyway,  after I had that turkey breast beaten into submission – yes, I pounded the hell out of it between sheets of wax paper,  I was ready to make the stuffing.

So I didn’t really use a precise recipe for this.  I heated a 12-inch heavy skillet with butter, then began sweating a large yellow onion, diced, then added diced celery and leaves a couple ribs, a bay leaf, sprinkled it with poultry seasoning and let it go a few minutes.  While that was cooking over medium low heat,  I peeled 1 pound of Italian sweet sausage out of the skins and tossed in the pieces.  Then I turned the fire up to brown the meat.  Now I chopped 3-4 brown mushrooms and threw them in.  Then a handful of walnuts, and a small amount of dried cranberries.  It was beginning to look pretty good,  but still lacked the “bulk” we think of.

So here’s my bright idea for the day.  I got out a one pound package of shiritaki noodles,  rinsed them, then cut the noodles with scissors and tossed them into the mix,  still letting it cook a bit.  Adjust the seasonings with sea salt and cracked black pepper,  I took it off heat to cool.

Finally I beat a couple eggs and mixed it with the cool stuffing ingredients.

Now is when I laid out the turkey breast and whacked it some more with the pounder under wax paper until it was a uniform — well sort of uniform – 1/2 inch thick.  Then I spread the stuffing on top, leaving a narrow band around the edges  I rolled that sucker up,  tied it with kitchen string three or four places and put it into a olive oiled Le Creuset baking dish.

I put it into a 375 degree oven and let it roast until the instant  thermometer registered  155 degrees.(about 40 minutes).  Whole kitchen smelled great.  Took it out.  rested it a bit,  cut and discarded the strings, then took it to the table with accroutement – green beans,  Silver Cloud Cranberry Sauce (that recipe’s coming tomorrow),  this stupendous fresh pumpkin relish (ditto, recipe comes tomorrow or the next day)  Faux potatoes and Gravy (again with no bad starch in it).

Everything was great except that damn turkey.  It was tasteless, bland and boring as hell.  Not my fault.  I’ts just factory farming.

So next day I got on the phone, called my butcher friend at the local gourmet grocery, Eden Gourmet, and ordered the best organic turkey breast they had, already boned but with the skin on.

Now I took that home, and still being wary of the whole category, poured cold water and white wine to cover it in a large pot, tossed in a bay leaf, red pepper flakes, black pepper corns, a big jolt of kosher salt, and let it brine over night in the refrigerator.

Next day,  I repeated the entire operation, but with this nice, professionally trimmed piece of meat.

That my friends,  was a Thanksgiving turkey to be thankful for.

And that dressing?  outstanding.  Try it.  (you can order shiritaki noodles formwww. Miracle Noodle.com or pick them up at your local Chinese grocery.  They’re amazing.  Calorie and carb free,  they pick up the flavors around them, so when stuffed into the bird with all the other great veggies,  it was just stupendous.  I think of this as a great find.  Happy Turkey Day.