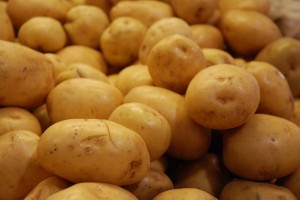 A publicity-hungry potato industry bigwig is out to prove that spuds are health food — and to make his point, that’s all he’s eating for two starchy months.

Chris Voigt, executive director of the Washington State Potato Commission, is spiking his blood sugar with 20 potatoes a day. No butter, no milk, no sour cream and chives — just those ugly white carbs for every meal and snack.

To be fair, Spuds McNutsy isn’t trying to win converts to this wacky diet — he’s just protesting the Department of Agriculture’s decision to stop subsidizing white potatoes for low-income Americans.

But this is a lose-lose proposition. He’s not going to score many political points if he’s on death’s door at the end of two months… and even if he lives to tell the tale, it doesn’t exactly prove that potatoes are healthy.

It would, however, say a lot about the remarkable resilience of the human body against all manner of abuse.

“I want to show the world that the potato is so healthy, that you could live off them alone for an extended period of time, without any negative impact to your health,” he wrote in his blog. “And who knows, maybe it will make me healthier by lowering my blood pressure and cholesterol?”

Who knows, maybe it will. But who cares? There’s more to health than meeting meaningless targets on a medical chart.

In addition to causing constant spikes in blood sugar levels, a diet of only potatoes will send potassium levels through the roof, while causing massive deficiencies in key nutrients, including vitamins A, B12 and E along with calcium and selenium.

But there is a plus side to this little stunt: After two months of eating nothing but taters, he may never touch one again.

And that would be the healthiest move he could ever make.