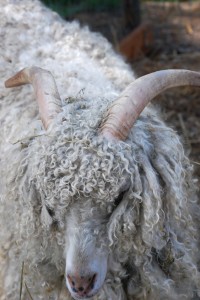 Last night I went to a gala Bobby Burns birthday party.  His 215th I believe.  The hosts, Jane and David Cates, throw this shindig every year, complete with much Scotch whiskey toasting, David plays the top half of the bag pipes, and Jane cooks mashed potatoes and neeps – the Scottish name for turnips to accompany the haggis. Haggis is a foreign word used to describe a sheep stomach filled with offal and boiled into submission.   The Scots claim it for their national dish.

Jane had brought this real, ready-to-go-into-the-boiling-water-bath haggis back from her latest walking tour of Scotland.

Now, I have some Scottish ancestors, so I feel I can speak freely here.  Robert Burns may have been a fine writer, but he was certainly not inspired by the cuisine of his native land.

That damned haggis is almost identical to the grub I feed my four dogs every day. Organ meats cooked to mush with oatmeal and some minor seasoning.  And while my dogs seem to like it, I can’t say I care for it.  No.  Not at all.

The dogs thrive on this, so perhaps there is something to it.  But as for me, I believe I have come to understand the reputation the Scots had for being such fierce fighters, such worthy adversaries, and such close-with-the-buck boys.  They were surely put into a foul humor by a steady diet of haggis.

But, as I always say,  I’m not the be-all-and-end-all last word expert on cuisine.  Different strokes for different folks.

And for all you Scottish sympathizers out there,  here is my take on Alton Brown’s Haggis.  Mr. Brown did not mention where one might obtain the basic ingredients for this recipe.  Not for sale at my gourmet grocer’s, that’s for sure.

Rinse the liver, heart, and tongue. In a large pot of boiling, salted water, cook these parts over medium heat for 2 hours. Remove and mince. Remove any gristle or skin and discard. (Now there’s an appetizing step in the process.)

In a large bowl, combine the minced liver, heart, tongue, suet, onions, and toasted oats. Season with salt, pepper, and dried herbs.  Moisten with some of the cooking water so the mixture binds. Remove the stomach from the cold salted water and fill 2/3 with the mixture. Sew or tie the stomach closed. Use a turning fork to pierce the stomach several times. This will prevent the haggis from bursting.

In a large pot of boiling water, gently place the filled stomach, being careful not to splash. Cook over high heat for 3 hours.

To serve, put the whole swollen dark brownish gray magilla on a platter the table.  Someone has to pierce it so it doesn’t shoot haggis stuff all over the ceiling.  Let it stand for a few minutes, then cut into slices.  One haggis will serve 12 hungry Scots, or about 20 visitors.