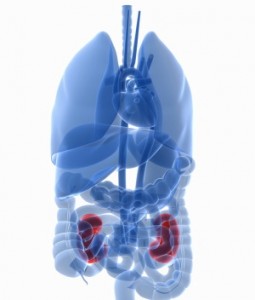 Kidney failure is a main complication of diabetes, but a new study shows that a high-fat, low-carbohydrate diet could reverse that in eight weeks.

The high-fat, low-carb food plan is known as a ketogenic diet.  It starves the body of carbs and sugars, thereby tricking the body into burning fat for fuel instead of glucose.

Doctors theorized the diet might work for diabetics by blocking the toxic effects of glucose, a simple sugar made as the body metabolizes food but that can become harmful in diabetics who lack enough insulin to regulate it.

So the team at Mount Sinai Hospital in New York took two groups of mice that were genetically predisposed to having Type 1 or Type 2 diabetes. Half were fed a standard, high-carb diet while the other half received a high-fat, low-carb (ketogenic) diet.  After eight weeks, kidney failure was reversed in the ketogenic-fed mice, said the study published in the open-access journal PLoS ONE.

“Our study is the first to show that a dietary intervention alone is enough to reverse this serious complication of diabetes,” said lead author Charles Mobbs at the Mount Sinai School of Medicine.

“This finding has significant implications for the tens of thousands of Americans diagnosed with diabetic kidney failure, and possibly other complications, each year.”

According to the National Institutes of Health, 24 million people in the United States have diabetes, and close to 180,000 people are living with kidney failure linked to their diabetes.

Mobbs said the findings indicate even as little as a month on the regime could be enough to “reset” the body and avoid kidney failure.