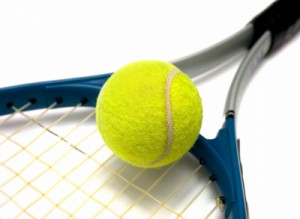 A simple allergy test could have led to one of the most dominant stretches in tennis history. Since Novak Djokovic’s nutritionist discovered last year that he was allergic to gluten, the tennis star has switched to a gluten-free diet and is staying away from most processed carbohydrates.

That means no pizza, pasta, pretzels or various other starchy foods that don’t necessarily begin with “p.” Djokovic made the change last year. Since then he’s made the final of the U.S. Open, won the Davis Cup and Australian Open, defeated Rafael Nadal four times, and is currently on a 39-match winning streak, the third longest of the Open era. So much for the idea of a carbo boost.

Those with an allergy to gluten often have trouble digesting the protein, which can lead to various medical issues. When he received the positive allergy test, Djokovic played it safe and cut out the starches altogether.

Is Djokovic better because the gluten allergy was affecting him phsyically or is he better because he improved his diet in general? It’s a chicken and egg question. Though as a Cornell nutrition professor told The Wall Street Journal, the effects of the new diet could be more mental than anything.

“If you believe in a cause of your disorder, it becomes the cause,” David Levitsky told the newspaper. “We see this in many different studies. If you believe it, you change your behavior in the direction of being cured.”

Djokovic spoke about the change earlier this year. “I have lost some weight but it’s only helped me because my movement is much sharper now and I feel great physically,” he said in April.
The low-carb, gluten-free diet didn’t turn Novak Djokovic into a great tennis player. He was a Grand Slam champion and No. 3 in the world while eating the protein. However, the change may have turned him into a greater, more fit tennis player or it may have simply made him believe he was a greater, more fit tennis player. And, really, isn’t that the same thing?

If you or someone you love could be suffering from a gluten allergy, please call The Salerno Center at 212-582-1700 to schedule an appointment with Dr. Salerno.  This simple allergy test could quite literally change your life.