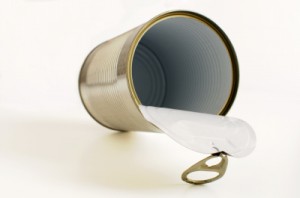 Bisphenol A (BPA) is a plasticizer that is regarded as an endocrine disruptor that may be linked to cardiovascular disease, diabetes, and liver abnormalities. Due to increased press coverage, the public is becoming more aware of the dangers of BPA in common plastic items such as water bottles, however, most people are not aware that BPA is also commonly used in food can linings.  A new study from researchers at Harvard Medical School shows that canned soup delivers high levels of BPA.

Karin B. Michels, from Harvard School of Public Health (Massachusetts, USA), and colleagues assessed the urinary bisphenol A (BPA) levels of 75 healthy men and women, ages 18 years and older, who consumed homemade soup for five consecutive days, and then ate canned soup for another five days in a row. Urinary levels of BPA averaged 1.1 mcg/L during the homemade soup segment, but reached 20.8 mcg/L during the canned soup segment.

“The absolute urinary BPA concentrations observed following canned soup consumption are among the most extreme reported in a nonoccupational setting,” the researchers wrote in a research letter published in the Nov. 23/30 issue of the Journal of the American Medical Association.

Observing that: “The effect of such intermittent elevations in urinary BPA concentrations is unknown,” the team urges that: “Even if not sustained, [it] may be important, especially in light of available or proposed alternatives to [BPA-containing] epoxy resin linings for most canned goods.”

As you know, Dr. Salerno advocates eating whole, organic, unprocessed foods. The BPA study above is only one more reason to toss your canned soup and cook your own from scratch. To get you started, we’ve included two delicious winter soup recipes to nourish you and your family. Enjoy!

Directions
In a stock pot, render the bacon until crispy, remove the bacon. Saute the onions, celery, shallots, and garlic in the bacon fat for 2 to 3 minutes. Add the stock, beans and bouquet. Bring up to a boil and reduce to a simmer. Allow to cook for about 2 hours or until the beans are tender. Add the diced chicken meat. Season with cayenne, salt and black pepper. Garnish with Pecorino

Directions
Cut squash into 1-inch chunks. In large pot melt butter. Add onion and cook until translucent, about 8 minutes. Add squash and stock. Bring to a simmer and cook until squash is tender, about 15 to 20 minutes. Remove squash chunks with slotted spoon and place in a blender and puree. Return blended squash to pot. Stir and season with nutmeg, salt, and pepper. Serve.