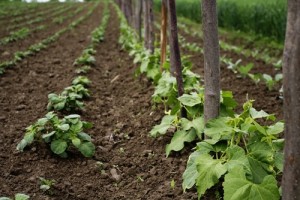 Who knew there was anything to do in Albuquerque but to pass through on the way to Taos or Santa Fe? So when I was invited to spend four days exploring the food scene in Ab’que, I was doubtful.

It’s not like I don’t know anything about the area. I grew up in the panhandle of Texas and New Mexico was our closest vacation get away. But Albuquerque?   Never considered it.

Sure, it has that charming Old Town looking like something out of a Western movie with its low shops and tourists haunts. The candle shops, the turquoise sales, the Indian wares from the Pueblo and Navahos and Hopis. But food?   What’s up with that?

Turns out Albuquerque has one of the most vibrant food scenes around and is most aware of healthy eating, locavore opportunities, and great choices for both tourists and natives alike.

In four days, I plowed through endless enchiladas and tacos. Went to a thousand seat place called El Pinto which not only grows its own organic produce, but grinds up the kitchen leavings every night for its own on-site worm farm.  These people get it.   Plus the food is fantastic.

The brothers who run this place look and act like the Smothers Brothers but they are aware of the wisdom of their Mexican grandmother as well as the technical expertise of their Long Island father. Their jarred salsas sold as El Pinto are available in fine grocery stores coast to coast.   Check out their website, punch in your zip code and you can see where to order these healthy, organic products.

We went to visit one of New Mexico’s great food ambassadors, Jane Butel, who has been teaching people the ancient wisdom of chiles and corn for more than 40 years.   She showed us her entire line of products which are fresh, redolent of flavor and nutrition

But perhaps the most interesting thing for the Silver Cloud dieter is the ancient wisdom of the cuisine which is a blend of American Indian, Mexican, and cowboy cooking.   While the folks who invented these recipes couldn’t have told you why they ate chiles, which have 9 times the vitamin C of citrus, or why they favor large servings of beef and pork, full of nutrient dense protein and fat, but they can tell you the result. The food is delicious, healthy and robust.

We were there during the fall harvest when every grocery store has an impromptu stand in front of it where people are roasting the endless Anaheim and Poblano peppers in cylindrical cages over an open propane flame.

Once you buy the just roasted peppers, black and steaming, you put them into bags to steam, then peel off the blackened skins, discard the seeds and membranes, and chop the peppers into whatever dish you are making.

In New Mexico, these peppers are frozen and used all year long. What a natural nod to health.

Here is the traditional Green Chile Stew recipe served in every joint from Clovis to Window Rock, and all points in between.    It’s delicious, it’s good for you, and you will love it.

This is a maintenance recipe to keep you through the long winter’s night. It is nutrient-dense, it is yummy.  What more could you ask?

Heat the oil in a 6 quart pot over high heat, then brown the meat in batches, placing cooked meat on a plate so you don’t overcrowd the pan.   Sauté onions in the remaining fat until golden.    Throw in the garlic and cook about 30 seconds.    Add meat to the pan with the juices then add broth, potatoes, and salt. Raise to a boil.   Reduce heat and simmer until tender, about 1 hour.   Add green chile and red bell and cook 20 minutes. Throw in cilantro, and serve in wide rimmed soup bowls.