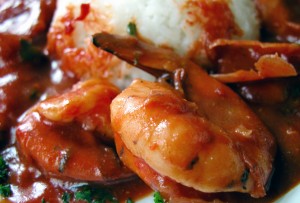 In the Low Country of South Carolina, a hundred years ago, shrimp was in such abundance that it was considered every day food. Breakfast often consisted of a kind of stew made from shrimp with highly spiced and fresh additions. Yes, the Southerners who were going to work in fields for the day,  or out on shrimp boats, probably always ate this savory stew over a bed of garlic cheese grits, but for you, my pretty,  the unadulterated dish will please you. You don’t need carbs to be satisfied. Try this recipe and you’ll agree.

In a 12 inch skillet, fry bacon until brown over medium high heat. Remove it from the skillet and set it aside. Cook mushrooms in the bacon fat until beginning to brown, then garlic and stir.  Sprinkle shrimp with Creole seasonings, then add to the skillet along with bacon and cook and stir until the shrimp begin to turn pink. Add green onions and parsley and cook a minute. Stir in tomatoes, sprinkle with black pepper and salt and cayenne. Cook and stir another minute or so.  Serve in wide rimmed soup bowls. Yum!