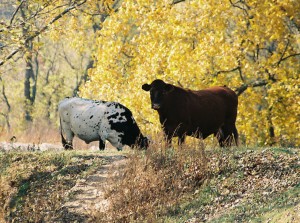 I interviewed Ted Slanker over the telephone, then went to his website, www.texasgrassfedbeef.com, to learn the rest of the story. Why should we eat grass fed meats? What does finishing an animal in a feed lot do, when it comes to nutrition? What’s the difference in omega 3’s and omega 6’s in grass fed, vs. grain fed meats.

If you’re confused, read on, then you’ll want to order grass fed meats, especially for your children. Here’s what Mr. Slanker says. (for more complete remarks look on his website.  Lord that man can talk.  But then, that’s what we Texans do.  It’s an oral society, you see.

Grass-Fed Beef In A Nutshell

For generations we’ve been told that grain-fed beef is better beef.  It’s a great, natural, healthy food.  But that rosy picture steadily loses its luster as new scientific discoveries in the fields of human health and nutrition keep advancing.

The August 1998 issue of the Angus Journal included a supplement titled Feeding Options.  In the supplement’s first article, written by Troy Smith, there’s an interesting line.  “For the ruminant animal, there’s nothing more natural than range.”  (“Range” means “large pasture.”)  Just think about this for a moment.  Notice the words “natural” and “range.”  Also, “there’s nothing more natural” means that every other situation is less natural.  Probably the least natural cattle feeds are waste products from bread plants, potato processors, breweries, ethanol plants, and candy factories; corn silage; and GRAIN.  Yes, grain!

What do Cattle Eat

Cattle, like all other ruminants and many other critters, developed on this Earth eating green leafy plants, mostly grass.  They ate virtually no grain.  In fact, there is not an animal species on this planet (which includes people) that evolved eating grain!  This is important since scientists are reporting that many of America’s leading health problems are due to diets top heavy in Omega-6 fatty acids versus the intake of Omega-3 fatty acids.  Omega-6 fatty acids come mainly from grains which are also deficient in Omega-3 fatty acids.  Omega-3 fatty acids, or rather the appropriate balance of Omega-6 to Omega-3 Fatty Acids, come mainly from green leafy plants, some nuts, and of course animals that ate green leaves.

The story about fatty acids is very important.  It started unfolding back in the early 1980s when nutritionists and scientists started making new discoveries about fats.  They knew there were many different fats, but they did not fully understand the role they played in animal body function.  But they started realizing that some actually play a pivotal role in human health.  Some of the most crucial fats are in the list of compounds found in the membranes of every cell in a human body.  That means some fats are not what we usually associate with the fat we can see around our waist for instance.  With more study the dietitians and scientists figured out that the human body needs a very particular balance of certain essential fats in its diet because the body’s only source for those fats is food.  Two of the most important essential fats are in Omega-6 and Omega-3 fatty acid families.

After isolating these fatty acids scientific experiments determined that if the ratio of Omega-6 fatty acids to Omega-3 fatty acids in cell membranes exceed 4:1, people develop more health problems.  This is especially meaningful since the ratios in grain-fed beef can exceed 15:1 whereby grass-fed beef is down around 1:1  Similar ratios are also found in ALL grain-fed versus grass-fed livestock products!  The products include all meats, poultry, dairy, and fish.  For instance, skinless chicken breasts from the store are 18:1 and it does not matter if the chicken is Tyson, organic, vegetable fed, free range, or grown-on-the-moon chicken.

What health problems arise with a diet high in Omega-6’s.

The health problems associated with diets high in Omega-6 and low in Omega-3 are cancer, heart disease, depression, obesity, insulin resistance, allergies, autoimmune diseases such as lupus and arthritis, diabetes, attention deficit syndrome, and the list goes on.  These diseases are not associated with bacterial infections.  They are all body failures, not from aging, but from improper diets.

Unfortunately, what the “industry sells” is what the consumer believes it wants.  Therefore industry wants the fattest grain-fed beef possible because Americans believe the beef with the most marbling and a close trim on the external fat is the best beef

The consumer’s fascination with bright-white saturated fat (which develops when cattle are fed grain) started about a century ago and industry picked up on this consumer preference.  The feedlot industry then evolved on the back of the grain feeding concept.  Therefore for the past 60 years the modern grain-fed beef industry has been promoting fat as the reason why beef has good flavor, why it is juicy, and why it is tender.  All the while it has been promoting fat the beef industry has had to fight a rearguard action because many “modern” health problems have been linked to eating beef.  But it wasn’t until just recently that scientists determined that it wasn’t just beef that caused the dramatic increase in health problems in the United States, but the feeding of grain in the production of all meat, poultry, dairy, and fish/shrimp products (plus the feeding of grain to people) and the dramatic reduction of Omega-3 fatty acids in the American diet that was a result.  To this day the beef industry is still ignoring the grass-fed health conscience story.  But the facts are overwhelming and in time the consumer will wake up and industry will change and provide the consumer with grass-fed meats.

We know that grain-fed beef products have high ratios of Omega-6 fatty acids to Omega-3 fatty acids even when they are “extra lean.”  (That’s because the fatty acids are components of all cell membranes.)

We know that beef from cattle grazing lush grasslands is a natural source of Omega-3 fatty acids.  And, unlike grain-fed beef, it is also high in CLA (Conjugated Linoleic Acid), beta carotene, and vitamins A and E.

How does Grass Fed Meat Differ From Grain-Fed

For a fact the consistency, flavor, look, smell, and texture of grass-fed beef differs from grain-fed beef.  Therefore some consumers will have to learn to appreciate the differences if they are going to eat grass-fed beef.  Others will like it immediately because it actually tastes like beef.  Others will gladly learn to like it because it does a body good.  In all cases folks will need to learn how to properly cook grass-fed meats.