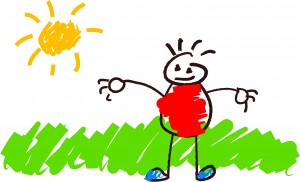 With all the talk from the vegetarians about not eating meat, it’s important to remember that eating meat is, perhaps, what made us human. That is, smart enough to invent tools, to grow a big, smart brain, and – what did I tell you??? To reduce the size of our swollen bellies.

Now what in the world am I talking about?  Anthropologists spend a lot of time staring at the choppers of fossils. Human remains,  monkeys, other apes, and prehistoric members of our earthly families. What they find is that our mouths have become smaller and more compact with smaller teeth, no tearing incisors, no grinding molars to grind down indigestible seeds and nuts. We’ve just become more refined in our mouths.

When we lived in the trees, and subsisted on fruit, leaves, and nuts when we could get them, we had big teeth that could chomp through hard shells,  and also that could grind raw food into submission. Think of a bonobo in a tree.

Think of pictures you have seen of large apes with their big, undershot jaws, their liply lips, and their small brain pans. They needed jaw strength more than brain power.

But as we climbed out of the trees, our diet did improve somewhat, but we still had to eat most of the day to get enough calories and this mean the development of a big, ugly gut.

This was not attractive. As man began to club little animals and eat them raw, his brain began to grow. Then, when mankind discovered fire and could cook both meat and tubers, his brain got the main benefit of this improved diet.

Mankind began to invent tools, and work in groups, and the size of his belly began to reduce. And his brain and head size began to increase.

Just like yours will if you’ll get off the high carb diet and eat more meat and only unprocessed complex carbohydrates. This is when you can begin to look less like a cow chewing your cud and dragging around that big stomach, and more like a supermodel.

You think I’m kidding? I’m not. Ask Leslie Aiello, an anthropologist and director of the Wenner-Gren Foundation in New York who studies the evolution of digestion.

The deal is, the gut needs lots of energy if it only gets raw vegetables (are you listening vegans?) and this robs the brain of the nutriment it needs to function at a top speed.

So the bottom line is this:  if you’d like to be a person whose brain rockets along at warp speed,  moving you to the head of the pack, eat meat, eat cooked vegetables in modest portions, and go ahead and change the world.

You’re backed up by solid science. Richard Wrangham, at Harvard, believes the basis of being human can be found in the groceries. Raw food doesn’t pack the energy needed by big-brained, small-toothed mankind. He cites research that shows, yes, people can lose a lot of weight on a raw food diet, but, guess what? They experience chronic energy deficiency.

Can you afford that? Not me, pal. I’ve gotta work. As Wrangham says, “Plato said if we were regular animals, we wouldn’t have time to write poetry.”

Wrangham argues that whatever can be lost by cooking, including some vitamins, is far outweighed by the advantages.

And in conclusion, Wrangham, who is, for the record, a vegetarian, points out that cooking has led to some of the finer elements of human behavior: people share labor, they come together at the table at the end of the day, and they tell stories. Now that’s what I call being human.