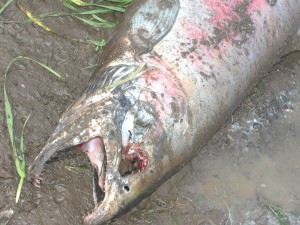 Unless you remember to always buy wild caught salmon,  you could get caught on this new Monsanto horror show of a fish made up of strange parts.

As the Food and Drug Administration considers whether to approve genetically modified salmon, one thing seems certain: Shoppers staring at fillets in the seafood department will find it tough to pick out the conventional fish from the one created with genes from another species.

Despite a growing public demand for more information about how food is produced, that won’t happen with the salmon because of idiosyncracies embedded in federal regulations.

The labeling question has emerged as the FDA determines whether to approve the fish, an Atlantic salmon known as AquAdvantage that grows twice as fast as its natural counterpart. The decision carries great weight because, while genetically modified agriculture has been permitted for years and engineered crops are widely used in processed foods, this would be the first modified animal allowed for human consumption in the United States.The AquAdvantage salmon has been given a gene from the ocean pout, an eel-like fish, and a growth hormone from a Chinook salmon.

The FDA says it cannot require a label on the genetically modified food once it determines that the altered fish is not “materially” different from other salmon – something agency scientists have said is true.

Perhaps more surprising, conventional food makers say the FDA has made it difficult for them to boast that their products do not contain genetically modified ingredients.

‘The public wants to know’
Consumer advocates say they worry about labeling for genetically engineered beef, pork and other fish, which are lining up behind the salmon for federal approval.

“The public wants to know and the public has a right to know,” said Marion Nestle, a professor in the Nutrition, Food Studies and Public Health Department at New York University. “I think the agency has discretion, but it’s under enormous political pressure to approve [the salmon] without labeling.”

The debate will be taken up this week, with an advisory committee meeting Sunday and Monday on whether to allow the modified fish, and a separate panel meeting Tuesday on whether the fish should be labeled. The panels will offer recommendations to the FDA commissioner, who will decide both matters.

The biotechnology industry is opposed to mandatory labeling, saying it will only bewilder a public that is not well informed about genetic engineering.

“Extra labeling only confuses the consumer,” said David Edwards, director of animal biotechnology at the Biotechnology Industry Organization. “It differentiates products that are not different. As we stick more labels on products that don’t really tell us anything more, it makes it harder for consumers to make their choices.”

The FDA defends its approach, saying it is simply following the law, which prohibits misleading labels on food. And the fact that a food, in this case salmon, is produced through a different process, is not sufficient to require a label.

The controversy comes at a time when Americans seem to want to know more about their food – where it is grown, how it is produced and what it contains. Books criticizing industrial agriculture have become bestsellers, farmers markets are expanding and organic food is among the fastest-growing segments of the food industry.

There is nothing to stop salmon producers or food makers in the United States from voluntarily labeling their products as genetically engineered – except a fear of rejection in the marketplace, Hallman said. “I don’t know of a single company that does that,” he said.

The FDA maintains it can only require labeling if a genetically engineered food is somehow different from the conventional version – if it has an unusual texture, taste, nutritional component or allergen, for example.

Although some consumer advocates maintain there are important differences, the agency’s scientists have already said they see no “biologically relevant” variations between the AquAdvantage salmon and traditional salmon.

Consumers could be certain of getting the non-modified version if they bought salmon labeled as “wild,” but most salmon consumed in this country is farmed.

Ever since the FDA approved the first genetically altered material for use in food in 1992, when Monsanto developed a synthetic hormone injected into cows to increase milk production, the agency has held that it cannot require food producers to label products as genetically engineered.

In the intervening years, the use of genetically engineered crops has skyrocketed; 93 percent of this year’s soybean crop is genetically engineered, according to the U.S. Agriculture Department. Byproducts of those crops – soy lecithin, for example – are found in thousands of processed foods from chocolate bars to breakfast cereal; none is labeled as containing genetically modified ingredients.

No ‘Hormone Free’ either
The labeling matter is further complicated because the FDA has maintained a tough stance for food makers who don’t use genetically engineered ingredients and want to promote their products as an alternative. The agency allows manufacturers to label their products as not genetically engineered as long as those labels are accurate and do not imply that the products are therefore more healthful.

The agency warned the dairy industry in 1994 that it could not use “Hormone Free” labeling on milk from cows that are not given engineered hormones, because all milk contains some hormones.

It has sent a flurry of enforcement letters to food makers, including B&G Foods, which was told it could not use the phrase “GMO-free” on its Polaner All Fruit strawberry spread label because GMO refers to genetically modified organisms and strawberries are produce, not organisms.

It told the maker of Spectrum Canola Oil that it could not use a label that included a red circle with a line through it and the words “GMO,” saying the symbol suggested that there was something wrong with genetically engineered food.

“This to me raises questions about whose interest the FDA is protecting,” said Rep. Dennis J. Kucinich (D-Ohio), who has introduced legislation that would require labeling for genetically engineered food. “They are clearly protecting industry and not the public.”

Write Representative Kucinich a letter and tell him you don’t want unidentified GMO food products without  clear labels giving you a choice.

One state with a sizable salmon fishing industry – Alaska – passed a law in 2005 that requires labeling of any genetically engineered fish sold there.

“One side of the argument says let’s give consumers sovereignty over their food choices,” Hallman said. “The other says we’ve done the science on this and it’s no different, so if we put a label on it, we’re implying it’s somehow risky and that’s like government imposed false advertising.”