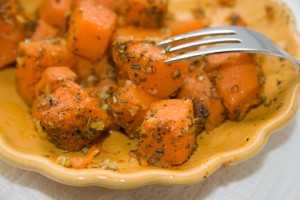 Have you ever tried to cut a raw pumpkin?  God did not put that hard shell on the pumpkin for nothing. It is meant to store all winter and by god, it will. But cutting into it? Hard to do.

So when I got the bright idea to create a pumpkin relish, the first problem to solve was how to make the damn cubes.

Microwave to the rescue. Just put that bad boy into the microwave, after you’ve stabbed it a couple times so it won’t explode and cook it for about 10 minutes. Let it cool a bit, then saw off the top (a-la jack o-lantern), scrape out the seeds and pulp, and you’re nearly there to making lovely, sightly pumpkin cubes that are already cooked and ready to be tossed with the yummy ingredients.

See that wasn’t hard was it? And its high fiber, filled with vitamin C and only 12 carbohydrate grams in an entire cup. It’s a relish for heaven’s sake. You’re probably gonna eat 1/4 cup tops.  What’s not to love?

Here’s how to make it.

stevia to taste (I used about 1/2 packet)

Stab the whole pumpkin in the top to let out steam and cook it in the microwave about 10 minutes, or until tender. Cool a bit, then saw off the top. Cut into quarters. Using a spoon, scrape out and discard seeds and pith. Now, using a sharp paring knife, mark off squares and holding the piece in your hand, cut the flesh away from the shell. The pieces will fall out into your hand. Transfer them to a bowl.