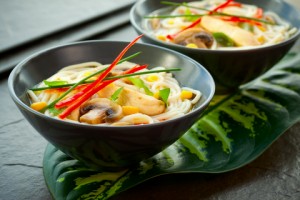 Of course,  I caught a cold on the airplane coming and going for Thanksgiving holiday across the country. You can almost count on it. Sitting for hours and hours in a closed environment with recirculated air and people hacking and coughing all around you. Unless you are Superwoman, you’re gonna get a cold.

As for me, I don’t have time to be sick. So I thought immediately of mama’s chicken soup. But of course, now, I know lots better iterations than mamas.

It’s not for nothing that chicken soup is made from one end of this world to the other, and often for its curative properties.

Does chicken soup’s reputation as a cold and flu remedy stand? Moses Maimonides, a Jewish philosopher, and physician wrote about its healing properties as far back as the 12th century.

In modern times, Stephen Rennard, M.D., a researcher at the University of Nebraska Medical Center, found that chicken soup has anti-inflammatory properties that may reduce the symptoms of upper-respiratory infections including colds.

So why does chicken soup heal? First off, the bone broth yields trace minerals and vitamins.  Adding chilies and citrus adds a giant jolt of vitamin C. Garlic does its magic. The truth is, you’ll want this soup even if you don’t have a cold.

For the most healthful version of this, make your own chicken bone broth and keep it frozen in quarts. Otherwise, buy organic chicken broth.

*Available at Asian markets and supermarkets across the country.

How to make your own chicken bone broth

Makes about one gallon

1 head of garlic, broken into cloves and smashed

Simmer bones in water and vinegar  at least 5 hours. The bones will soften, and the vinegar helps release minerals into the broth. When broth is cool, skim off fat, strain and store broth in zip locks in the freezer.