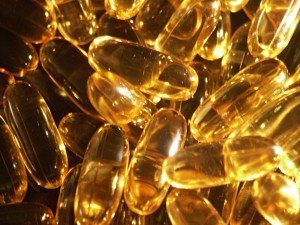 By Sylvia Anderson, IH Editor — Published: April 06, 2009
What if your weight gain was simply due to a deficiency in an essential vitamin . . . specifically Vitamin D? And, what if you could lose weight simply by getting enough Vitamin D in your diet? Is that even a possibility? It may be. According to a recent study, there seems to be a link between weight gain and not getting enough Vitamin D. Let’s take a closer look. . .

Where do you get Vitamin D?

Vitamin D deficiencies are thought to cause a number of health conditions, in addition to weight gain. A Vitamin D deficiency is linked to dementia and mental impairment in older individuals as well as depression in younger people. Vitamin D deficiencies in children can lead to rickets and can also lead to osteoporosis in later years. Children are often told to drink milk so that they can grow up to be “big and strong.” This is true, but scientists are finding that this does not only relate to bone health, but also the immune system, dietary health and even mental health.

When it comes to the immune system, Vitamin D plays a big part. Vitamin D is one of the essential vitamins that are needed to boost the immune system and to ensure you stay healthy. Studies indicate that a Vitamin D deficiency can also lead to more colds, flu and general poor health.

If you are not getting enough Vitamin D in your diet, you may be suffering from a Vitamin D deficiency and may experience any one of the problems mentioned above, such as weight gain, a poor immune system, brittle bones, rickets and depression as well as impaired cognitive behavior. One way to make sure that you get the proper dose of Vitamin D in your diet is to take a Vitamin D supplement as well as eat foods that are either rich in this vitamin or fortified with Vitamin D.

The new study with regard to Vitamin D and the link to weight gain is just one of many being conducted on the benefits of Vitamin D. And while more studies need to be done on the Vitamin D/weight connection, it is clear from this study as well as its predecessors that Vitamin D is an essential vitamin for good health.

If you are concerned with weight gain, especially as you get older and your metabolism slows down, you should be certain to eat foods that are rich in this vitamin or take a Vitamin D supplement. This may not only help you maintain your weight, but will also benefit your overall health and wellness.