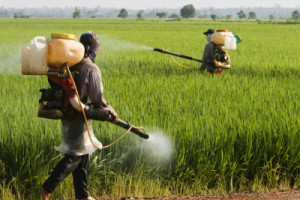 New research shows that Vitamins E and C may help protect against the harmful affects of one the worst pesticides still used in agriculture.

Diazinon is a very poisonous insecticide in the organophosphate family.  A known neurotoxin, is applied to some food crops such as nuts, fruits, vegetables and forage crops.  It is also used for cattle ear tag applications to control fleas and ticks.

In late 2000, the manufacturers of diazinon agreed to a four-year phaseout of all indoor uses, all lawn and garden uses, and all other nonagricultural outdoor uses, after the EPA determined that diazinon poses health risks to humans, birds and other wildlife.  It has been prohibited for residential use since 2004, however it is still used in agriculture.

If ABSORBED THROUGH SKIN, diazinon is Highly Toxic-not well absorbed

If INHALED (SNIFFED OR BREATHED IN), diazinon is Very Highly Toxic

Approximately 4 million pounds of diazinon are used in agriculture annually.  The highest use is on almonds and stone fruits.  The dangerous chemical causes deleterious effects on neural systems and brain toxicity.

The latest research study was performed to investigate the effects of treatment with vitamins E plus C on brain toxicity, which is possibly induced by Diazinon.

Twenty-one male rats were divided into three groups (n = 7 per group) as follows:

The results showed that:

• Treatment with diazinon induced significant (p < 0.05) increases in the level of serum malondialdehyde in rat brain. [Malondialdehyde is a marker for oxidative stress.]

• The vitamins E plus C combination reduced lipid peroxidation in rat brain. The activity of SOD level was significantly higher in DI + Vitamins group, compared to the control group.

• GSH-Px, SOD and CAT values were not significantly different in the Diazinon-treated group than in the control group.