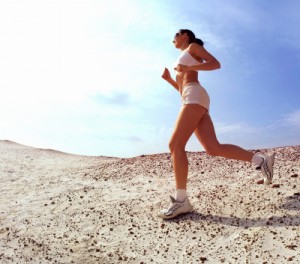 Cells continuously produce free radicals, which are organic molecules responsible for aging, tissue damage, and possibly some diseases, and reactive oxygen species (ROS) as part of metabolic processes. These free radicals are neutralized by an elaborate antioxidant defense system consisting of enzymes such as catalase, superoxide dismutase, glutathione peroxidase, and numerous non-enzymatic antioxidants, including vitamins A, E and C, glutathione, ubiquinone, and flavonoids. Exercise can produce an imbalance between ROS and antioxidants, which is referred to as oxidative stress. Dietary antioxidant supplements have long been used by professional athletes and exercise enthusiasts as a means to counteract the oxidative stress of exercise.

During exercise, oxygen consumption can increase by a factor of more than 10. This leads to a large increase in the production of oxidants and results in damage that contributes to muscular fatigue during and after exercise. The inflammatory response that occurs after strenuous exercise is also associated with oxidative stress, especially in the 24 hours after an exercise session. The immune system response to damage done by exercise peaks 2 to 7 days after exercise (this is why staying on top of your diet and supplementing with antioxidants are so important for optimum recovery, training, weight loss… everything).

In the latest study just released this month, involving 39 athletes, researchers found that supplementation with flavonoids, antioxidants and omega-3 fatty acids taken for 2 weeks prior and 3 days during cycling at 57% Wmax for 3 hours, was found to be associated with reductions in the immediate post-exercise increase of free radicals and oxidative stress. These results suggest that supplementation with antioxidants and omega-3 fatty acids will benefit all of us and protect from the negative effects of post-exercise oxidative stress and free radical damage.