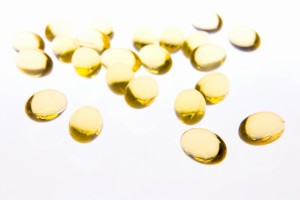 The metabolic syndrome is a clustering of risk factors including abdominal obesity, elevated fasting glucose (also called insulin resistance or “pre-diabetes”), hypertension, elevated triglycerides, and lowered high-density lipoprotein (HDL- good cholesterol). This syndrome contributes to disease risk that may increase the changes of an early death from multiple causes. Epidemiological evidence suggests that people with low-levels of omega-3 in their blood have as much as a 2.4-fold higher risk of having metabolic syndrome. On the other hand, people with the highest intakes of omega-3s have as much as a 46% lower risk of metabolic syndrome!

• Supplementation with omega-3s has an anti-obesity effect. It reduces total fat mass, abdominal fat mass, the size of individual fat cells, and raises levels of the beneficial cytokine adiponectin.

• Omega-3 supplementation dramatically lowers triglycerides and other risk factors for atherosclerosis. One gram per day of fish oil was shown to normalize triglyceride levels in elderly people and protect them from rising levels.

• Higher omega-3 plasma levels are correlated with higher HDL levels. Supplementation with omega-3s resulted in a reduction in the ratio of triglycerides to HDL level, a beneficial change.

Other Benefits of Omega-3 Supplementation

• Protect your tissues and organs from inflammation

• Help fight against cancer at its earliest stages

While the value of Omega-3 fish oil supplementation is widely known, their quality and potency can vary significantly. Dr. Salerno’s EPA and DHA formulas are independently tested for:

• Purity – Dr. Salerno’s formula is one of a handful of supplements whose fish oil capsules comply with the CRN Monograph. Our fish oils are tested for pesticides, heavy metals and contaminants.

• Potency – Dr. Salerno’s capsules are among the most potent available. Most other products require patients to take up to four times as much to equal a single dose of ours.